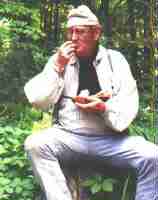 One of the benefits of belonging to Peters' Corps is the food that our lovely ladies (and gallant men) prepare at events for members of the regiment. We have received numerous requests for recipes from those in "the hobby" as well as members of the public. This section of our web site will be the repository for 18th century recipes. This list of recipes will be constantly growing, so check back often for new culinary delights. If you have a period recipe to share with us, you can send it to us by clicking here.

Those who were lucky enough to taste the yummy dishes our ladies served at the Bidwell House, have been clamoring for the recipes. Diana Wigham has graciously provided us with the source and the details:

Trim about 18 heads (we believe the author meant "florets") of broccoli;

Wash them, boil them green as you can, and lay them on a dish;
Mix the yolk of a hard egg with a cruet of oil, a little vinegar, a spoonful of mustard, a little salt and;

and the second recipe:

add an equal Quantity of Celery;

cut into small Pieces the Whites of four boiled Eggs chopped rather fine.

Mix these Ingredients well together, just before the Sallad is to be made, then serve the Dressing with it.

one Gill of good Vinegar (or Juice of Lemon if that is preferred);

one Gill of Olive Oil;

one and one half Teaspoonfuls of Salt;

one large Tablespoon of mixed Mustard;

a little Sugar to give a piquant Zest to the Vinegar.

Beat the Yolks of four Eggs to a light Cream, then stir the Vinegar gradually into them, beating hard all the Time. Stir the Mixture over the Fire until it thickens, then remove, and beat gradually into it the Sugar, Salt, and Pepper and Oil. Do not fail to beat it well. When very smooth set it upon Ice to become well chilled.

--- from The Williamsburg Art of Cookery.

After a long trip we were running low on supplies in the commissary. It had been a very long time since we had something special to eat. We had just arrived at the Hartwell Tavern in Concord, and we had our encampment out side, as we were not welcome inside because of our loyalty to our King. The women collected dry rations of apples from the soldiers, just enough to make a pie. We did not have any spices, cinnamon and such. So we used what the tavern had in the herb garden, making sure that we were not seen by the Tavern keeper or any of the rebels for they might hang us for doing so. The pie came out quite nice and was enjoyed by all. What a treat it was to see the men so happy eating the pie. It had been months since we had cooked up something so sweet to eat.


Get enough dried apples to fill one half of a large wooden bowl. Cover the apples with hot water and let stand until the apples are soft. Fill pie shell with apples, that have been patted dry. Top the pie with all the brown sugar. Chop mint and put it on the sugar. Dot pie with butter. Put on top crust and bake in a Dutch oven until it is done. Enjoy!

When we had our recent wood walk, Chris Kennick favored us in our afternoon repast with some deliciously tasting beef jerky. He has been persuaded to part with his recipe.

3lbs. of flank or round steak;


Cut the beef into strips ½" thick. Soak the beef in the rest of the ingredients for at least 2 hours. After soaking, towel off the beef. You can then either place the meat in a food dehydrator for eight to ten hours OR place in an oven (with the door slightly open) at 120-130 for 8 to 9 hours. After it's cooked, leave it in the oven to air dry.

Marcia Kennick shares her receipe for the ginger bread that she made at one of our recent events.

Add these alternately with:


1 cup sour milk to which you have added 1 teaspoon of soda;

Bake in a shallow greased pan in moderate oven about 30 minutes.

-- from The Williamsburg Art of Cookery.